Father Charles Coughlin was a priest who spoke on the radio and had a weekly magazine who promoted the hate of Jews. His weekly radio broadcast routinely reached 15 million listeners. Coughlin’s message was always the same: Jews were evil. Coughlin argued that Jews caused the Great Depression and were out to destroy Christianity. He also said that all Jews were communists, which was a message that reached many Americans who feared “communism” as a threat to democracy. Working class Americans who were dealing with the economic effects of the Great Depression really responded to Coughlin’s radio program. 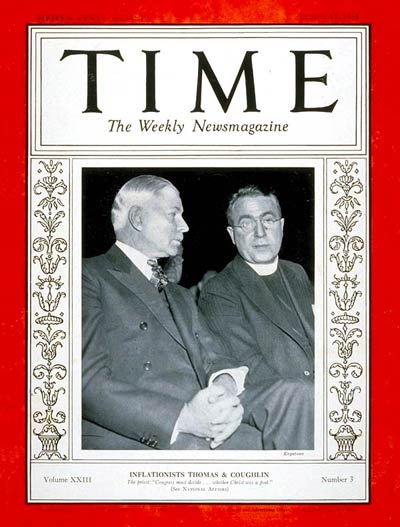 In addition to his radio program, Coughlin published a magazine called Social Justice, reached 1 million people weekly. Coughlin re-published forged documents known as the “Protocols of Elder Zion” which were originally published in Russia. These documents described a plot by Jewish leaders to “destroy Christian civilization” and impose “financial slavery upon the world”.

The worst message that Coughlin spread was when he announced his support for the Nazis and Hitler. He said that Germany was right to eliminate Jews who would bring communism to the country. He also said that violence against Jews was justified. Supporters of Father Coughlin called themselves the “Christian Front”. The Christian Front was an all-male, all white group. Members of this group ended up beating and killing jews and looting and destroying their homes and businesses.

Father Charles Coughlin– known as the “Radio Priest”. His radio broadcast was extremely popular throughout the 1930s and 40s. He spread his hate and disdain for Jewish people through the media, spreading anti-semitism throughout America to all his listeners.

Anti-semitism– hostility or prejudice of jews

Protocols of Elder Zion– originally published in Russia at the turn of the century, forged documents describing a plan by Jewish leaders to destroy Christian civilization and impose financial slavery upon the world. These documents were reprinted by Coughlin to show that Jews were a danger to society.

Nazis– led by Adolf Hitler, refers to members of a member of the National Socialist German Workers’ Party, ran concentration camps that contributed to the mass genocide of millions of Jews.

Communism– a political theory derived from Karl Marx, advocating class war and leading to a society in which all property is publicly owned and each person works and is paid according to their abilities and needs. This scared many Americans during this time period because they feared losing the freedom of democracy.

Can you think of  a powerful figure in present day who has used the media to spread a negative message?

How can the media spread hate and negativity today towards certain groups or certain people, as it did in this time period to marginalized Jews?

What role do you think the media played in spreading hate of the Jews during this time period?

Do you think that the media played a big role in the Holocaust?

View all posts by alexisdeeweiss